Developers or not, we all use software we didn’t develop ourselves. In the professional context, this requires some measure of trust: running untrusted software is a huge risk, as it can do harm, from spreading viruses to misusing the business processes e.g. wiring money to an unintended bank account.

Given that nowadays software distribution is mostly immaterial, as software in all forms is downloaded over the Internet, there is the need to find a way to replace the good old holographic seal we had once on CD-ROMs with an equivalent digital proof of trustworthiness.

Without this proof we must assume anyone could potentially have tampered the software, by adding/removing/updating both code and configuration: this is known as the man-in-the-middle attack (aka MITM).

This is true for source code as well for code libraries or final executables. One may use a specific dependency in a NodeJS application, that unbeknownst to anyone will hijack the running computer’s CPU to mine cryptocurrencies, or downright steal BitCoins from a wallet.

Digital signatures are a solution to such issues. A signature is a seal of sort on the software: it verifies the author’s identity and ensures that the code has not been changed or corrupted since it was signed by the author, ensuring authentication and integrity.

The generation of this digital seal is a process that only the author can reproduce, and is based on the very same principles that govern TLS or SSH.

We are going to recap some cryptography principles, take a dive into the digital signature process and see how to ensure trust in both code and binaries, from sources to the final Docker container. We will use GnuPrivacyGuard alias GPG, and we will assume you already are familiar with how it works and have a keypair at hand. 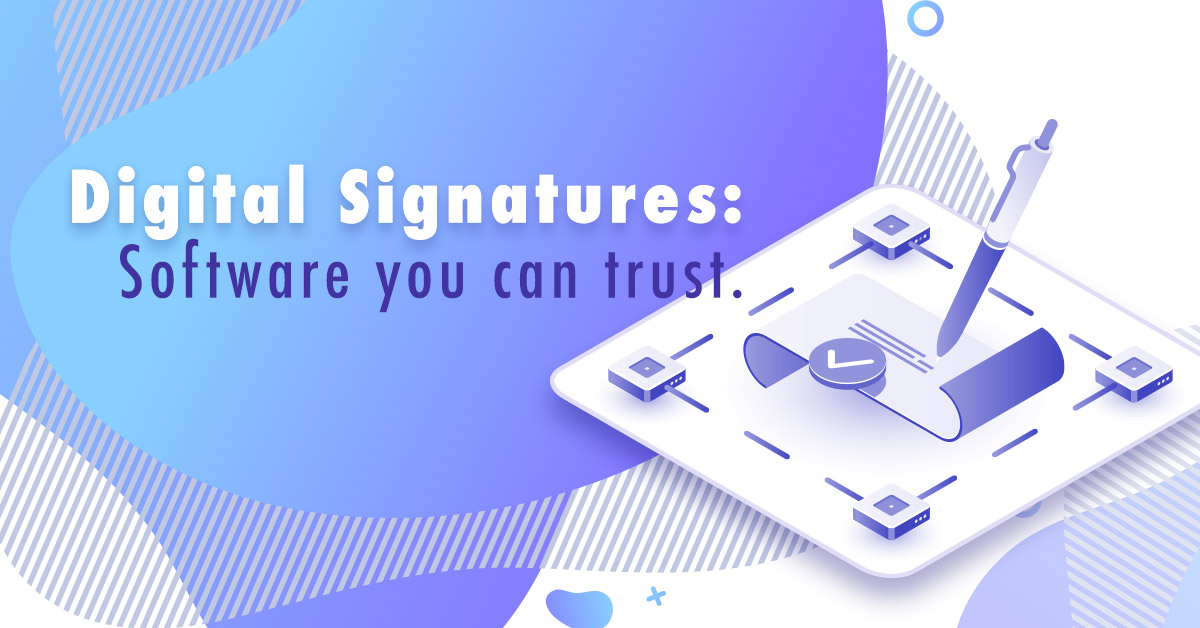 Data encryption using keys offers two different approaches. Before diving right into the signing process itself, here is a lightweight refresher to cryptography if needed.

One can use the same key to both encrypt and decrypt the data. For example, a letter can be encrypted by replacing it with another letter which index in the alphabet has been moved by X This particular method is famously known as the Caesar’s cipher. To decrypt it, the only necessary information is X - just move the position back by X. X is the key, and it’s used during both encryption and decryption. This common key principle is behind what is known as symmetric cryptography, and it’s what most people have in mind when they think about encryption.

The biggest issue with symmetric cryptography arises during key sharing. For example, Alice encrypts a message, and sends it in encrypted form to Bob. Alice needs to send the key to Bob as well. Because of MITM attacks, she should also encrypt the key, using another key. But how should she send this other key? This is a bottomless issue.

To cope with that, an alternative approach is to decouple the encryption from the decryption by using different keys. This is known as asymmetric cryptography, or public key cryptography.

Though the mathematical concepts and proofs behind it are complex, the principle in itself is quite straightforward. From a bird’s-eyes view:

That’s all! Now, let’s go back to digital signatures.

The same principle of asymmetric cryptography can be used for software signing. With encryption, only the desired recipient can read the data. On the opposite, signing means that though everybody can read the data, its source can safely be proven to be the designated emitter only.

To get started with software signature, a basic setup should be executed once, similarly to what you would do for most other cryptographical setups:

Now, for every different piece of data that has to be signed, the trust authority proceeds to create a signature encrypting a one-way hash of the software with its private key.

The encrypted hash is the bundled along the code, and since the public key is shared in the public domain, everyone can now verify the software-signature pair, ensuring the data and its source are genuine.

Before signing the software we provide as a whole, it’s necessary to ensure the source code itself is trusted.

In structured work environments with multiple developers working on a single project, many are the opportunities for a MITM, from gaining access to a machine with write access to a git repository to malicious impersonation of a colleague.

With Git (or any other Control Version Software), it’s very simple to impersonate someone else. With the following commands, everyone could e.g. commit under the author’s name:

It is child’s play to spoof commits pretending to be someone else.

There are several ways to prevent malicious code from finding its way into code repositories: screening developers, limiting commit rights to a limited set of them, code reviews, etc.

But in every case, there’s still a slight chance such malicious code might end up in the final software anyway. The first step to prevent that kind of impersonation is to sign the source code.

Git allows to sign both tags and commits, ensuring a way for the committer to certify the code is his, pinpointing the ownership of the source code.

The most common approach is to sign tags only: that generates a signature based on all previous commits, meaning a previous commit cannot be changed without invalidating the signature.

Of course is important to remember that there’s no guarantee a rogue commit could have slipped in unnoticed. Code review assumes once more an important control role, and so does privileging SSH as the transport mechanism to actually push your commit to the remote repository.

Signing all commits on the other hand implicitly means signing tags as well, as those are only pointers to a specific commit. Human error plays a big role in this approach, as a developer might simply forget to sign a commit. This lends usually to trying to automate the commit signature, resulting in even more threats: if the working machine is compromised, with an automated signature process or an active and loaded agent, malicious code could be easily introduced in a signed commit.

Everyone should be able to check if the tag signature is valid and who signed it. Assuming you have the signer’s public key in your GPG keyring:

This approach is especially effective when integrated in the build step of a Continuous Integration pipeline, in order to automatically ensure only sources signed by trusted team members are accepted.

Unfortunately At the time of the writing of this post, neither Jenkins nor GitLab CI provide a feature to check the GPG signature, and the implementation needs to be custom-scripted depending on the Continuous Integration platform you choose.

Sources are probably not the only building blocks of one’s software: except in very specific environments, developers make use of libraries and/or frameworks.

Dependencies you wish to use in your software need the same grade of trustworthiness, and need to be checked carefully.

As above, JARs will be used in the following section, but the approach is similar for other technology stacks.

To check the signing of dependencies, Maven provides the org.simplify4u.plugins:pgpverify-maven-plugin plugin. It can be used either:

For example, the following is an excerpt from a Maven POM that checks the signatures of dependencies:

At this point, any Maven lifecycle invocation (e.g. mvn compile) will trigger the check goal. From a SecDevOps standpoint, this is to be preferred to the command-line approach. It yields the following:

Making sure source code come from a trusted party is a great first step in enforcing a trust chain, but is visibly more valuable to the software provider than to the clients, as the latter tend to use a packaged form of the software itself rather than the source code. The trust needs to be conveyed to the output artifact by signing it as well.

We made sure both sources and dependencies come from trusted parties, and artifacts being the result of compiled sources and dependencies, they transitively should be trusted too. Nevertheless, they should be signed as well: software distribution is the most user-facing part of the entire process, and usually the one where the end user needs to ensure the authenticity and identity of the publisher he trust. Most of the final users of our software will trust this final signature in deciding to install and use your software.

Using GPG, it’s trivial to sign a file. The following applies to any artifact, regardless of the technology stack e.g. Python eggs, Ruby gems, NPM packages, Java JARs, etc. As an example, let’s use it to sign a common Java binary, a JAR:

This creates an additional sign-everything-0.0.1-SNAPSHOT.jar.asc file, which includes a key as clear-signed text, which can then be verified using GPG.

The signing of the final artifact itself can be automated as part of the build process. The following is a Maven POM snippet that will automatically sign every artifact using our GPG default key:

Now, when actually building the package with mvn package, it will ask for the private key passphrase. While this seems to indicate there can be no automated build pipeline, there are a couple of solutions:

Nowadays, it’s far from uncommon to distribute software through Docker images. Instead of providing a technology-specific artifact and writing a lot of documentation on how to run it, it makes sense to bundle both the artifact and the platform it runs on in a container. For example, after building the above JAR, it will be distributed in the image along with the Java Virtual Machine, and their respective configurations.

If the Docker image is what is distributed in the end, it makes sense to sign it, in addition to (or in replacement of) the signing of the artifact. To achieve that, Docker provides Docker Content Trust (DCT):

Docker Content Trust (DCT) allows operations with a remote Docker registry to enforce client-side signing and verification of image tags. DCT provides the ability to use digital signatures for data sent to and received from remote Docker registries. These signatures allow client-side verification of the integrity and publisher of specific image tags.

Once DCT is enabled, image publishers can sign their images. Image consumers can ensure that the images they use are signed.

To sum up, enabling DCT prevents:

There are two ways to enable DCT:

The most important thing to remember about DCT is that only tags are signed (and verified).

Hence, the following command doesn’t trigger DCT because the push doesn’t set a tag explicitly. Check the last line of the output.

Note that, as stated above, only tags might be signed. This means a specific image can have multiple tags pointing to it, some of them signed, and some not.

If DCT is enabled and a tag is set for the push, then the signing process kicks in:

The first time Docker uses DCT within a push, it will follow a procedure to create the keys - the root key, and the repo key, and immediately use them to sign the tagged image.

Once DCT has been enabled, the Docker daemon will automatically prevent pulling unsigned images:

The same goes for running, i.e. if the image is already present locally:

However, if the tag has been signed at the time the image was built, everything runs smoothly:

What to Read Next
TLS: how to get started securing web properties through HTTPS
Advanced Secure Shell: 6 Things You Can Do With SSH
How to secure a private Docker registry

Thank you! Please verify your email to continue.
Oh no! Something went wrong.