Instead of relying on traditional VLAN based isolation, every Exoscale instance gets assigned a Public IP and leverages Security Groups to provide full-fledged isolation and security.

In this post we’re going to demonstrate how we can totally isolate and secure an instance or a group of instances from being accessed by any traffic not explicitly allowed, even though a public IP subnet is being used on the machine.

Before digging into the setup, let’s first see what the security groups can do for us:

Security groups provides Layer 2 filtering to keep your instance safe from different types of spoofing and Man In The Middle attacks. This filtering is being managed automatically so you don’t need to worry about it. For example the following traffic will be dropped:

With security groups on Exoscale, layer 2 Ethernet isolation is enforced. This is commonly achieved using VLANs on a standard architecture.

Security groups provides also Layer 3 filtering, which can be managed through our console or API:

We’re going to illustrate a secure Frontend / Backend scenario. Web servers in the Frontend group will communicate with MYSQL servers in the backend group. We don’t want any backend servers to be accessible directly from outside.

Please take into account that BUM traffic is not supported with network isolation setup. BUM is being dropped by egress rule (see below). This is an expected behavior as we don’t want anyone to receive this traffic, which may also leak sensitive information. Therefore any application relying on Broadcast, Unknown unicast and Multicast traffic type will not work. 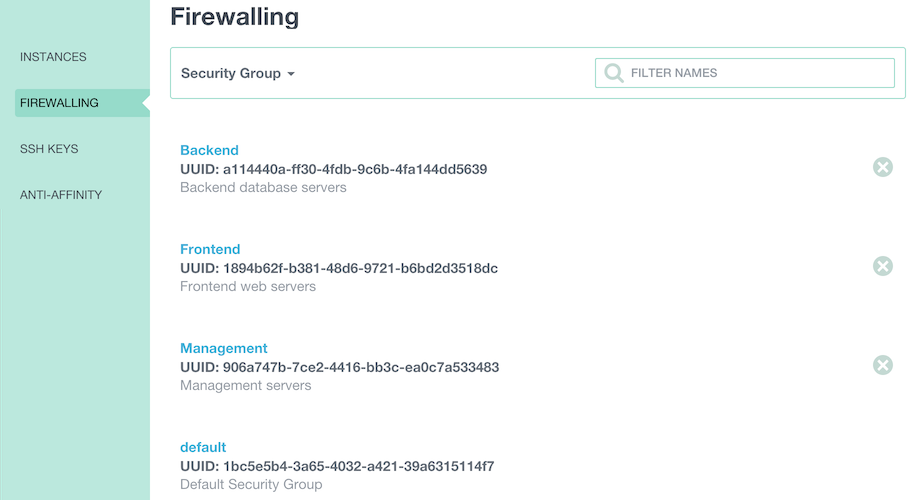 Now we add the following 3 required egress rules to allow our Backend instances to get their user data (port 80), their password (port 8080) and DNS resolution:

We now allow each instances part of the “Backend group” to communicate with each others within the group:

For this demo we chose to allow all TCP and UDP traffic between instances. Depending on the use case this rule may not be required. It’s also possible if your application traffic flows are well known to only select specific Protocols / ports here, which is more secure but also more complicated to maintain / operate.

Let’s allow some ingress HTTP traffic from internet (any) to our Frontend group:

Now we’re going to allow Frontend to access Mysql port on the backend:

In our demo we want to allow Backend instances to perform OS updates from the internet. We need then to allow HTTP and HTTPS:

As we wanted maximum security, we did not allowed remote management (SSH) from the internet. To be able to manage our machines, we’re going to allow SSH only from the “Management” group to “Frontend” and Backend”:

And we allow SSH to “Management” from the internet:

It is even better if your SSH access is restricted from a known source IP;

Let’s see what we’ve achieved with this setup: 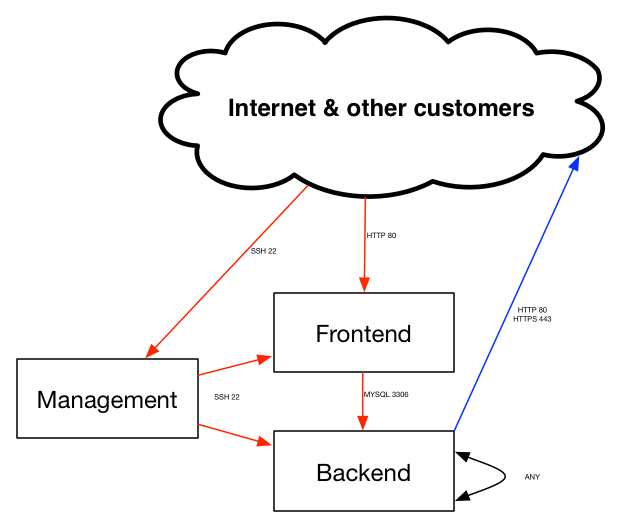 In an upcoming blog post we will cover Virtual Private Cloud (VPC) setup in details.