If you happen to use established online applications like e.g. Gmail, or some the biggest social media or e-commerce platforms, you probably never encountered a static page asking you “Please wait while we update our application”.

In fact, more and more services need to be always up and reachable for a variety of possible reasons:

While some accidental downtime is hard to avoid completely, updating one’s application with zero downtime is actually possible. 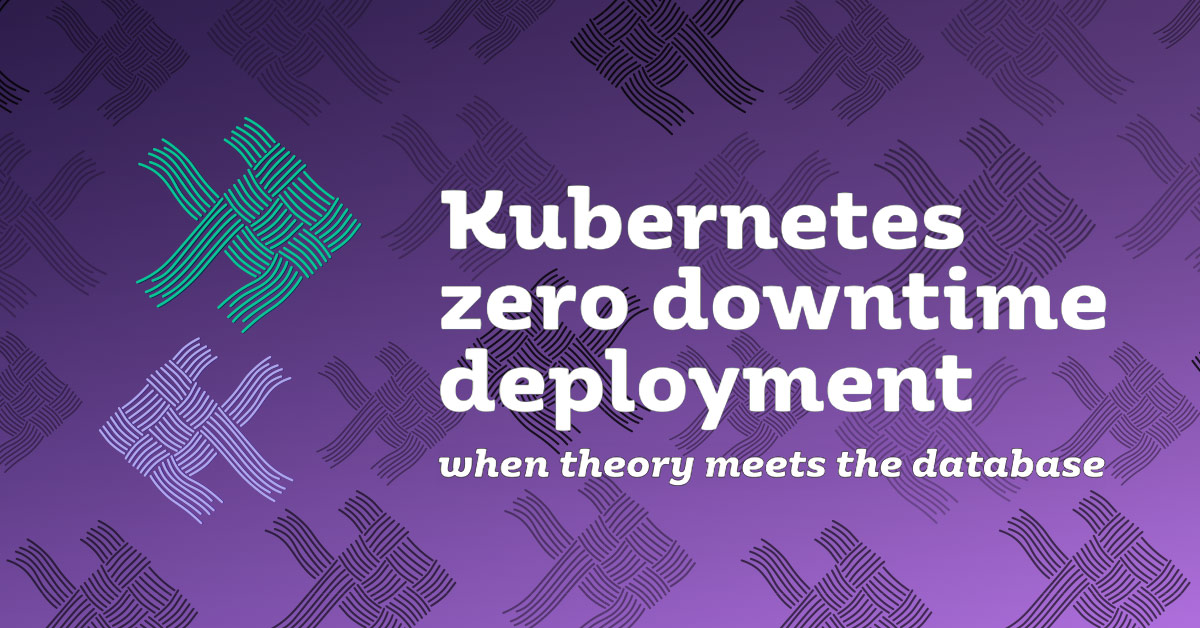 Probably one of the oldest ideas to achieve a zero downtime update is the Blue-Green deployment principle.

Yet, there are several issues with the Blue-Green deployment:

Fortunately, Kubernetes allows to do without Blue-Green deployment, by providing a dedicated Deployment object.

A Deployment controller provides declarative updates for Pods and ReplicaSets.

The important bit in the description above is “at a controlled rate”: that means that a group of Pods can be updated one by one, two by two, by removing them all at once and spinning up new ones, the choice is yours. The exact behavior is configured by a snippet similar to this one:

Let’s illustrate the process with some examples.

The following diagrams show the evolution of the number of Pods, in regard to the version, as time passes.

Deploy by adding a Pod, then remove an old one

In the first configuration, we allow a single additional Pod (maxSurge = 1) above the desired number of 3, and the number of available Pod cannot go below it (maxUnavailable = 0).

With this configuration, Kubernetes will spin up an additional Pod, then stop an “old” one down. If there’s another Node available to deploy this Pod, the system will be able to handle the same workload during deployment at the cost of extra infrastructure. Otherwise, the Pod will be deployed on an already used Node, and it will cannibalize resources from other Pods hosted on the same Node.

Deploy by removing a Pod, then add a new one

In the next example, we allow no additional Pod (maxSurge = 0) while allowing one single Pod at a time to be unavailable (maxUnavailable = 1).

In that case, Kubernetes will first stop a Pod before starting up a new one. The main benefit of this approach is that the infrastructure doesn’t need to scale up, keeping costs under constant control. On the downside, the maximum workload will be less.

Deploy by updating pods as fast as possible

Finally, the last configuration allows one additional Pod (maxSurge = 1) as well as one that is not available (maxUnavailable = 1), at any moment in time.

This configuration drastically reduce the time needed to switch between application versions, but combines the cons from both the previous ones.

Accounting for the time the application needs to start up

The time it takes for a newly started Pod to be able to handle a workload is not negligible unfortunately. Yet, Kubernetes will send traffic to a newly started Pod as soon as it’s both live and ready: a live container means it’s running, while a ready container is able to serve requests. By default, both hold the value Success. This is an issue, because when the Pod is actually starting, the service will route requests to it, and it won’t respond.

To counter that, applications need to provide endpoints to be queried by Kubernetes that return the app’s status. For example, imagine we developed a dedicated /ready endpoint, that returns an HTTP 200 status when it’s ready to handle requests, and HTTP 500 when it’s not.

Integrating the /ready endpoint with Kubernetes’ readiness probe can be achieved with the following snippet:

With the above configuration, Kubernetes will route traffic to a Pod only when the underlying app is able to handle it.

At this time, we know enough to handle “Hello World” types of applications. But rolling updates with Kubernetes face the same issue as Blue-Green deployment: changes need to be compatible database-wise!

We mentioned above that schema changes must be backward compatible. Let’s illustrate the issue with a simple yet not trivial use-case.

You may notice that this schema blurs the boundaries between a PERSON and an ADDRESS. We should instead respects those boundaries, and target a schema like the following:

Let’s imagine the application using the original “blurred” schema is already in production, and is a huge success. Our goal is to transition to the final schema without any downtime.

We could design the new version of the application to be able to cope with the updated schema as well as the legacy one. This way, we could execute a rolling update deployment, then update the schema. This seems ideal, with one big caveat: the deployment cannot be rolled back, since the legacy application is not able to cope with the updated schema. Hence, application versions do not only need to be backward compatible, but forward compatible as well. It seems we’re back to square one, because the schema change cannot obviously be both.

To achieve our goal the trick is to split the schema update into a series of small side-by-side compatible schema updates. Additionally, the application needs to be updated in increments, such that a new app version is able to cope with the current schema update and the next one.

An important requirement is for the application to be the steering wheel behind schema changes. This can be done during app initialization.

With our example, here’s the migration path:

While the idea behind rolling updates is quite simple, implementing it in real-life is not trivial: it’s all too easy to forget about deployment rollback.

And even if one takes it into account, then new requirements start to pop up, which make the development of an upgrade a task in its own right. Such is the cost of a zero-downtime architecture.

Now, while we have looked at the theoretical part of the article, you may be wondering how a real world implementation of the process would look like.

And that’s exactly what we cover in our followup, with a use-case on how to deploy a Spring Boot application on Kubernetes with zero downtime!

What to Read Next
Configuring Kubernetes Applications with kustomize
An alternative to Minikube in the Cloud
Docker Logging, a Hitchhiker's Guide