There is no denying that in the last few years, technologies like Docker and Kubernetes, to name a few of the most relevant, have revolutionized how we reason about software development and deployment.

But whilst the fast pace of the software development industry pushes developers to adopt the most recent technologies, it is important to take a step back and to have a better look at established patterns that enable parts of these technologies.

The circuit breaker pattern is one of those patterns, widely adopted in microservices architectures. We are going to compare the pros and cons of implementing it with two different approaches: Hystrix and Istio. 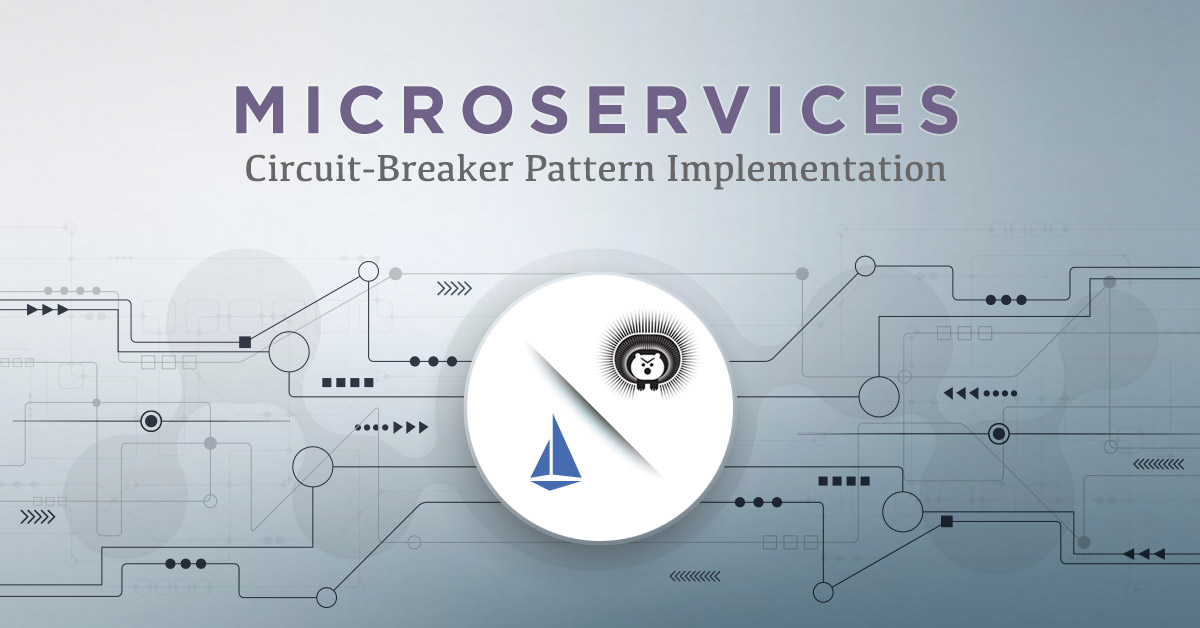 Let’s assume the back-end and the front-end communicate via synchronous HTTP calls.

Clients C1 and C2 call the front-end to retrieve some information. Since the front-end doesn’t have all the required data, it calls the back-end to get the missing pieces.

But because of network communication, a lot of things can happen:

And as per Murphy’s law (“Anything that can go wrong will go wrong”), communication between the front-end and the back-end will fail sooner or later.

If we look into the life-cycle of a single call from the front-end to the back-end, and consider the back-end is down because of whatever reason, at some point, the front-end will cancel the call with a timeout.

Zooming out to the application level, multiple clients call the front-end at the same time, which translates to multiple calls to the back-end: the front-end will soon be flooded with requests and will drown in timeouts.

The only sane solution in this scenario is to fail-fast: front-end should be made aware that something has gone wrong on the back-end‘s side, and return a failure to its own clients immediately.

This looks pretty similar to our issue: to protect our application from an excess of requests, it’s better to interrupt communication between the front-end and the back-end as soon as a recurring fault has been detected in the back-end.

In his book Release It, Michael Nygard uses this analogy and makes a case for a design pattern applied to the timeout issue above. The process flow behind it is pretty simple:

This can be summed up in the following diagram:

Istio is a service mesh, a configurable infrastructure layer for a Microservices application. It makes communication between service instances flexible, reliable, and fast, and provides service discovery, load balancing, encryption, authentication and authorization, support for the circuit breaker pattern, and other capabilities.

Istio’s control plane provides an abstraction layer over the underlying cluster management platform, such as Kubernetes, Mesos, etc., and requires your application to be managed in such way.

As its core, Istio consists of Envoy proxy instances that sit in front of the application instances, using the sidecar container pattern, and Pilot, a tool to manage them. This proxying strategy has many advantages:

Because outbound calls to the back-end go through the Envoy proxy, it’s easy to detect when they timeout. The proxy can then intercept further calls and return immediately, effectively failing fast. In particular, this enables the circuit breaker pattern to operate in a black-box way.

As we said Istio builds up on the cluster management platform of your choice, and requires your application to be deployed trough it. Kubernetes implements the circuit breaker pattern via a DestinationRule, or more specifically the path TrafficPolicy (formerly circuitBreaker) -> OutlierDetection, according to the following model:

Parameters are as follows:

Compared to the nominal circuit breaker described above, there are two main deviations:

Istio approach to the circuit breaker is a black-box one. It takes a high viewpoint stand, and can only open the circuit when things go wrong. On the flip side, it’s pretty simple to set up and doesn’t require any knowledge of the underlying code, and it can be configured as an afterthought.

Hystrix has many features, including:

Of course, the circuit breaker pattern figures among those features. Because Hystrix is a library, it implements it in a white-box way.

Netflix has recently announced it has stopped development of the Hystrix library in favor of the less well-known Resilience4J project.

Even if the client code might be a bit different, the approach between Hystrix and Resilience4J is similar.

Consider the case of an e-commerce web application. The architecture of the app is made of different micro-services, each built upon a business feature:

When a catalog item is displayed, the pricing/quoting Microservice is queried for its price. If it’s down, circuit breaker or not, no price will be sent back, and it won’t be possible to order anything.

From a business point of view, any downtime will not only have an impact on the perception of the brand, it will also decrease sales. Most sales strategies tend to sell anyway, despite the price being not entirely correct. A solution to achieve this sell strategy could be to cache prices returned by the pricing/quoting service when it is available, and to return the cached price when the service is down.

Hystrix allows that approach by providing a circuit breaker implementation that allows a fallback when the circuit is open.

This is a pretty simplified class diagram of Hystrix’s model:

The magic happens in the HystrixCommand methods run() and getFallback():

This could translate into the following code, using Spring’s RestTemplate:

This warrants some explanation:

The Hystrix wiki features more advanced examples e.g. where the fallback is itself a command that needs to be executed.

While the above code works, a Hystrix command object needs to be created every time a quote is made.

Spring Cloud, a library built on top of Spring Boot (itself built upon the Spring framework), offers a great integration with Spring. It lets one just annotate the desired fallback method, while handling the instantiation of the Hystrix command object:

Hystrix, whether standalone or wrapped by Spring Boot Cloud, requires to handle the circuit breaker at the code level. Thus, it needs to be planned in advance, and changes require a deployment of the updated binary. However, that allows to have a very fine custom-tailored behavior when things go wrong.

If there is the possibility for things to fail, given time, things will fail, and Microservices that heavily rely on the network need to be designed for failure. The circuit breaker pattern is one of the ways to handle the lack of availability of a service: instead of queuing requests and choking the caller, it fails fast and returns immediately.

On the other side, the Hystrix library uses the white-box way. It allows to have all different kind of fallbacks:

It also offers cascading fallbacks. These additional features come at a cost: it requires decisions for fallbacks to be made whilst still in the development phase.

The best fit between the two approaches will likely depend on one’s own context: in some cases such as the quoting service, a white-box strategy with a fallback may be a better fit, while for other cases it may be perfectly acceptable to fail fast, such as a centralized remote logging service.

And of course nothing prevents you to use them side-by-side.

What to Read Next
Circuit Breaker Pattern: Migrating From Hystrix to Resilience4J
Kubernetes zero downtime deployment: when theory meets the database
Java for Serverless: Ahead-of-Time compilation with Micronaut and GraalVM