Creating a great customer experience is about a lot of different things, such as quality of service, the right pricing, a user friendly and well designed interface and, of course, high quality technical support. 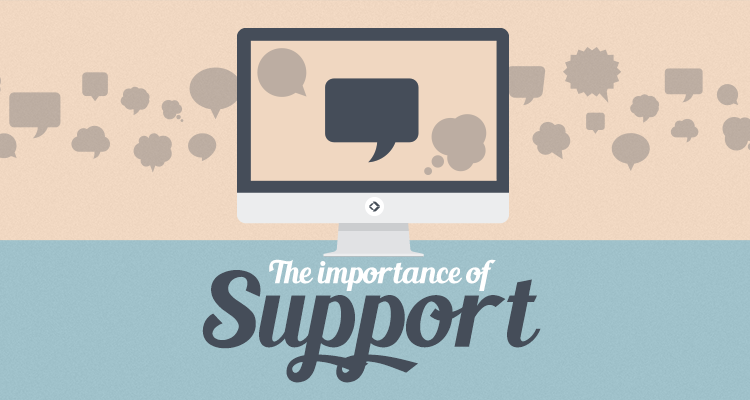 A successful business isn’t just about getting customers or signups. It’s also about keeping them happy with the service once they’ve chosen it.

To find out how a good support operation is built, we interviewed Pierre-Yves Ritschard, co-founder and CTO here at Exoscale.

Pierre-Yves has a wide and deep knowledge stemming from a career in two phases. He’s worked as an engineering manager for large telecom and media companies. He then moved on to work more with distributed systems and development, which coincided with a shift in what people were doing on the web. Pierre-Yves has built technology for multiple startups, among others paper.li (a social media aggregator). Together with Antoine Coetsier (the CEO) he founded Exoscale and has been its CTO since then.

How do you build a great support service?

Pierre-Yves: One of the key aspects is how fast you are able to provide help. What makes for fast support? Having a team who have enough expertise to quickly understand the issues customers present and then quickly find the solution.

One of the key aspects is how fast you are able to provide help.

I also think that another key aspect is to have compelling documentation that covers the most common use cases that people run into.

No one likes wading through tonnes of documentation, so that’s why we’ve put a lot of effort into creating very practical, highly targeted help guides. Our support team keep the guides up to date when they come across new customer issues. So, when someone else has the same issue the support team can point that customer straight to a well-tested answer.

Christer: What was your thinking when you started organizing the support?

Pierre-Yves: The basic idea we started with was that IaaS can be very daunting for people starting out with infrastructure. Working with startups I also noticed that knowledge of operations was not as common as it used to be in tech companies, because small tech companies tend to hire developers first. Developers know about infrastructure, they know the overall concepts, but sometimes they haven’t done the actual work themselves for an extended period of time.

We wanted people to have a great experience with infrastructure as a service and we knew that meant we’d need to offer a helping hand as they built and deployed their first projects. We wanted Exoscale to be part of our customers’ successes, so that is why we baked support into our service and interface from the get go.

Christer: What mistakes were you trying to avoid?

Pierre-Yves: Simplicity is one of the founding values of Exoscale. In my career I’ve seen so many service providers who forgot that a great service is built on abstracting away complexity. So we set out to avoid complexity as much as we possibly could. If you look at our offering and our dashboard you can see straight away that everything is straightforward to understand and use. That simplicity is the first step of support: if your service is easy to use then people don’t need to contact you in the first place!

Next we wanted to avoid the typical ‘first line’ problem. The people who use Exoscale are often seasoned professionals who have a good grasp on what they’re looking to achieve. So with Exoscale there are no scripts or outsourced first line teams that you have to battle before getting real help. Instead you’re in direct contact with people who are building and running the service and can offer you timely and direct answers to your questions.

I think we also made the mistake of not pointing to documentation within our interface itself at the beginning. This led to people having to look for it more than they should have to. Or they ran into problems they shouldn’t have. I’d say this was an early mistake that we made and learnt from.

Organising and tooling for support

Christer: Which tools and applications do you use?

Pierre-Yves: Well actually, and that’s a choice we made very early on, our documentation site and ticketing system are built in-house. It’s baked right into our customer management system and that’s also developed in-house, which gives us the flexibility of following each ticket’s history very closely. We have a very good overview of which issues a customer has raised in the past.

This allowed us to integrate support in our console from the start, so you never leave our environment and you have the opportunity to interact with us seamlessly.

Christer: How is your support organized?

Pierre-Yves: Our support is rotating. The idea behind is that we want everyone on the team to get a feel for how our customers experience our service and the difficulties they might encounter. Also, especially for the developers, that direct experience of what the customer needs and asks for provides a rich seam of ideas for what can be changed in the service. Everybody on the team, including the CEO and the CTO, is on the rotating ticket support schedule.

Christer: What are the KPIs? How do you measure success?

Pierre-Yves: We measure success by how fast we provide an initial response and we try to be honest about it. We try not to “race” for a reply just to make sure a ticket is marked as “waiting on customer”, which is the usual game that larger support services go for, but rather find the appropriate person to deal with the issue within a reasonable amount of time. Which has worked well.

Looking at recurring tickets is another of our KPIs; of course, we want to lower that number to a minimum. Because if people keep repeating the same question, it usually shows a flaw in how we designed our service rather than an actual problem.

Christer: What kind of tools do you primarily use for monitoring?

Pierre-Yves: Visibility is a key consideration at Exoscale. There are several members of the team who are very involved in open source monitoring solutions, especially Riemann which is a distributed system project, collectd which is an agent that collects application metrics and syslog-ng which is an advanced system log collection tool. collectd and syslog-ng allow us to extract metrics and logs from every node that runs on our infrastructure and we push that data to a database.

We use both Riemann and a Graphite compatible daemon to watch over the state of the system, detect trends and react to abnormal events. This gives us a very good sense of how our infrastructure runs and performs and it gives us very good telemetry tools to look at our history. It is a very proactive monitoring setup and usually enables us to fix problems before people experience them.

It is a very proactive monitoring setup and usually enables us to fix problems before people experience them.

Communication is the key to great support

Christer: How do you communicate with clients during incidents?

Each incident that occurs has its own timeline on exoscalestatus.com, which allows you to view the full life of an incident and also a postmortem when necessary. We’ve integrated that tool into our internal team chatroom to update incidents directly from there, as well. We’ve had such a great experience with our status page system that we’ve spun it out as a service of its own that will soon be available to everyone. Keep a look out for its launch soon; it’s called Runstatus.

Christer: What’s your biggest fear, when it comes to support?

Pierre-Yves: The worst case scenario for our support, which we’ve planned for and thus avoided, would be a situation where we are unable to communicate. We’ve built an infrastructure that can handle such events by distributing our ticket database over several data centers. That makes us able to act immediately and communicate our current status and reply to incoming tickets.

The worst thing from the customer point of view is having the infrastructure down and having no clue as to what is going on and when things are coming back up. It’s a nightmare scenario, but it’s also a scenario we’re ready for and can avoid.

How does social media change support?

Christer: What is the future of support?

Pierre-Yves: Social media has really changed the way people interact with B2C brands: energy utilities, retailers, banks and many other providers now have dedicated social media teams who help their customers through Twitter and elsewhere.

We’re starting to see now that people will also interact with us directly through social media and that’s an interesting change for a provider such as ours; it’s not always easy to fit IaaS questions into 140 characters!

However, we want to meet people where they are and so we monitor social media channels as a new medium through which customers might contact us for support. Once we’re in touch with some we then tend to move things into our usual ticketing system, though.

Christer: Ever get any funny stories from support tickets?

Pierre-Yves: We had the issue of a customer who felt our console and our interface were slow to interact with. There was a lot of debugging done and emails back and forth before we found out that the customer was using a slow landline in Cuba to access Exoscale.

You, as the customer, need support. Maybe not every day or even every year. But when you need it, it has to be in place. It is, and should be, an important factor when choosing which services to use.

Communication is an important part of support. Keeping the customer updated on the status of the service is vital. You as a service provider may need to deliver support for your customers. Remember, a customer who just had a problem solved by your support team is likely to be happy and go online and tell people how great you are!