There has been a lot of talk around Apache Mesos lately, and the last DevOpsCH Meetup in Switzerland was the perfect opportunity to find out more.

The main talk was given by Tobias Weingartner who is a senior SRE (Site Reliability Engineer) at Twitter, specifically in charge of the Mesos clusters in production and development environments at Twitter. Stuffed with a lot of anecdotes about the run of such a production, the sizes that Tobias related about defy comprehension. The bottom line is that Mesos has improved reliability at Twitter so much that not running an application on the Mesos clusters requires a ton of approval and validation from application owners!

Greatly interested about the capacities of Mesos and the hints of its very large use at Twitter, I set about running a small test of the Aurora + Mesos combo.

While the main talk was about Mesos, Mesos actually does not work out of the box and requires a scheduler for launching tasks. Apache Aurora is one of the 2 schedulers supported right now. As Tobias specified, there is nothing preventing a custom integration with Mesos directly but that would require a much longer blog post!

Clone the repo from Github, this might change as the project is in the Apache incubation process:

You will need to build the project with Tar deliverables as the deliverables are then synced with vagrant to the boxes. You can do this with ./gradlew distTar command in the main directory. Refer to Aurora documentation if this fails on your environment. Building secondary artifacts might be needed to. The best inspiration for this is simply the provision-dev-environment.sh script in the example/vagrant/ directory.

The Aurora project comes bundled with an example Vagrantfile template. This template will enable us to launch the following 6 instances:

As this little setup requires 6 instances, it makes sense to launch those away from my laptop. Memory already occupied with browsers tabs.

Switching from the standard Virtualbox configuration of this Vagrantfile to Exoscale requires only minor modifications. Check out this previous article for full details on Vagrant-exoscale

In order to have all those machines communicating together on a public cloud we need to replace private IP addresses in the Vagrantfile and also on the provisioning scripts.

We will be using a Vagrant plugin called vagrant-hostmanager that is capable of managing the hosts files of all boxes in the setup.

This is done by installing the plugin in your setup:

and adding the following to the Vagrantfile:

in order to enable the service.

To make things easier build on this repo and just add your APIKEY and SECRETKEY.

Most importantly, it will also update your local /etc/hosts file giving you nice names to play with.

With this long introduction over, time to launch the cluster. Simply issue in the modified Vagrantfile directory:

Connect to the interfaces

There are 3 interfaces that you can connect to: 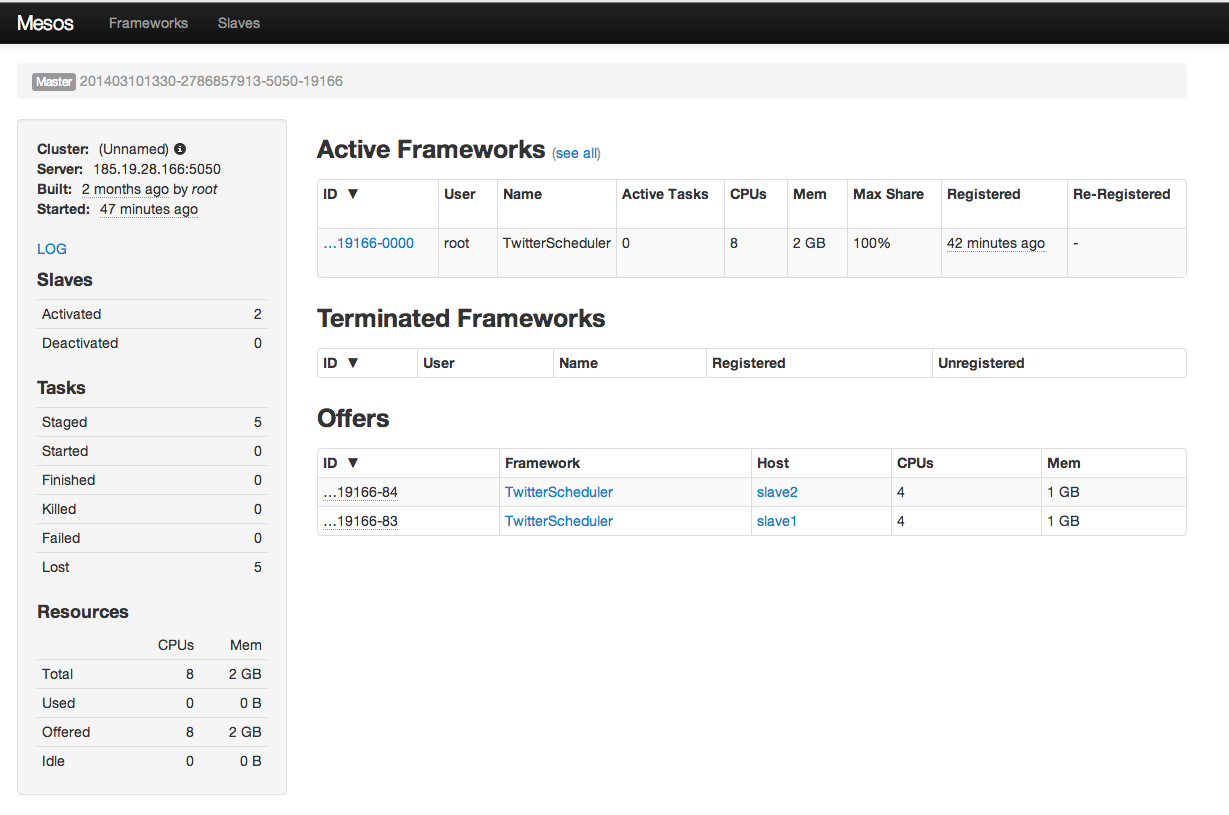 To actually do stuff with this cluster system, log on to Aurora:

Check the job is running in the aurora interface:

Now that the infrastructure is in place, playing with the features of Mesos and the Aurora scheduler will come soon. In the meantime, check Aurora’s user guide

There should be also a much nicer a reliable way to deploy those few components than relying on Shell script. Maybe leveraging Puppet of Chef capabilities into Vagrant would do the trick.