A lot of our internal code base at Exoscale is written in the Clojure programming language. While its expressiveness and functional nature makes the language attractive, its lack of full-application development tutorials makes it a little more difficult to approach than other languages.

Here is such a tutorial, exploring how to build a simple web application with the stack we at Exoscale have grown to love. 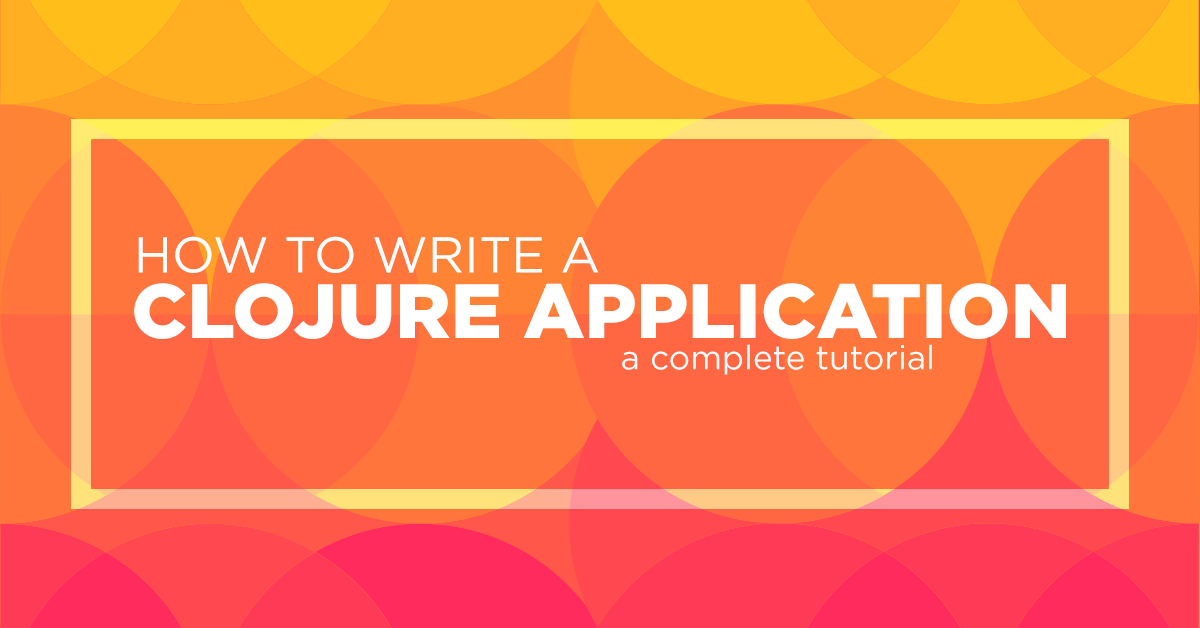 As an example, we’ll write a simple pastebin clone, exposing a service on the HTTP port, and storing the pastes in an in-memory database.

The principle of pastebin services, in a nutshell, is to allow you to paste snippets of text, into a web form and retrieve the content later on, via an invariant URL. This allows to quickly share text and code snippets across the internet.

The Ubuntu pastebin is an example of such a service.

We’ll use the same stack we tend to use at Exoscale, leveraging the following libraries:

The full code for this example application is freely available online on github, and it is encouraged to refer to the full source code there while reading this post. The snippets provided here generally do not show the whole file but rather highlight specific parts.

Get started with Leiningen

Leiningen is the most popular way to manage Clojure projects, and deals with the project’s release and dependency management for us. It serves as the entry point to your Clojure project as a developer. A few of the (many) useful commands:

The command that interests us most right now however is the lein new command, which will write out the skeleton of a Clojure project for us to start from:

We won’t need the “core” module the template generates for us, so we can get rid of it now:

Let’s replace the default project file with our own, including some of the dependencies we have chosen:

Building a Clojure application with components

We use components a lot at Exoscale, since they allow flexible run time composition of applications.

For our simple pastebin clone, we’ll need just a couple of components:

What are components exactly?

Components are implemented as clojure records, which you can think of as a Map where the fields are declared, and on which functions can be bound.

Furthermore, Clojure allows the definition of protocols, which declare a group of functions that records must implement.

Our components are records that implement the “Lifecycle” protocol, that defines two simple functions: start and stop.

Those functions define what should happen when the component starts (typically, setup some external state such as a database connection), and what should be done when it is stopped (closing the connection).

In order for our components to be started, we need to build a system map using the aptly named (component/system-map) function. What we do here is tell the component system which components to actually use, a little bit like what inversion of control frameworks of the java world would do (conceptually similar to the Spring framework, for example).

This allows us to build very simple components first (such as our in-memory store), that we will later be able to easily swap for another implementation, for instance using a real database as a back-end instead of simply storing data in-memory.

While the (system-map) call describes the list of components we have, the next call, (system-using) describes the relationship between them. In our case, for now the only relationship we declare is that our server component should know about and be allowed to access our storage component.

Behind the scenes, the components library will add a :store entry to the server component (a component is conceptually a map).

In order to serve our pastes, we’ll need a server component that is in charge of serving HTTP. We need very few things here: an URL to which to paste a new paste to, a URL with which to read pastes (by identifier), and a top-level form with which to present the form.

In its simplest form, that component wraps the aleph webserver:

As you notice, we pass it the result of the (handler) function, that builds the bidi handler. The handler is what maps the URLs your users will input to functions (that produce the content to display in the client).

The handler function also receives the store, as an entry in the server component map. This allows us to “forward” a reference to the store to our paste handler:

This will return the result of the index-handler and paste-handler functions to the HTTP client when launched via the system map, and we can immediately see how the paste’s uuid parameter will be passed to our handling function.

Notice that the handler makes use of the (partial) function around the handler functions. The reason for this is that our handlers would like to have two parameters - the request, and the store. However the ring specification says that handlers will only get a single parameter - the request. The partial function binds the store to our handler, and returns another function that now takes a single argument.

We need a place to store the data we send to our exopaste server. For now, we’ll build a very simple storage component that leverages a Clojure “atom” - a Clojure concurrency primitive wrapping arbitrary state - as an in-memory data-store.

During our store component’s initialization, we set its “data” field to a fresh new (atom). If we had a database connection (for example), we would also need to close it at program shutdown in the (stop) function.

The component itself is not the full story however - we need to add behavior as well.

For now, we’ll simply add a couple of functions that take our component as a parameter, and perform the required operations:

Our pastebin app still needs to render actual HTML to the client’s web browser. For this, we’ll create a new module, that will leverage the Hiccup library to render HTML.

Hiccup is a neat Clojure library that makes it convenient to create HTML with Clojure syntax, and since all of the data you write is just that - data - you can use all the power of Clojure to compose your view.

For our simple pastebin application, we will need just two views: one to render a paste, and one to display the paste form to our users.

Running it all: lein run

As we mentioned before, running our project is a simple case of executing lein run.

For now, our little project will start a server listening on localhost, so pointing your browser to “http://localhost:8080” should get you a running, minimal pastebin using our stack!

Pressing the submit button will redirect us to a paste, with Clojure syntax highlighting!