The microservice paradigm has been a topic of heavy discussion and interest in recent years. To make the matter even more involved developers and architects have different understanding on the core principles of microservices and the need to adopt a microservice-based architecture.

Taking the decision to build a new system or modernize an existing on as a set of microservices brings further the question of choosing the right framework for the purpose. In the Java ecosystem these could be the Netflix OSS, Spring Cloud, Eclipse Microprofile, Oracle’s Helidon framework, Wildfly Swarm or even Vert.x framework to name a few. 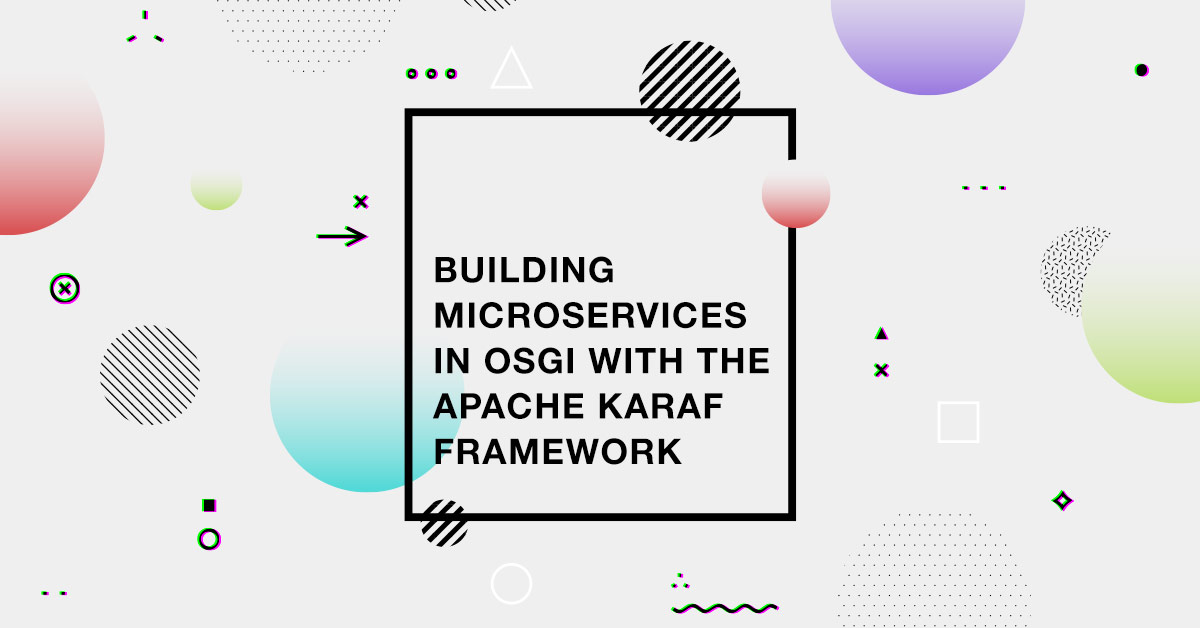 Since the Spring and JavaEE frameworks provide mechanisms for adopting a microservice-based architecture, the very fundamental building blocks of creating one with OSGi are already well established by the core and compendium specifications.

Even though many might argue that OSGi is an alternative to microservices, considering that it splits a typical Java application into a set of modules, the idea of using OSGi in combination with microservices is in fact not new and has been already successfully applied.

We are bundled with the task of architect a complex system. So complex that it is even required that the separate microservices be split into separate self-container modules internally, enabling each one to evolve over time without having to bring down the entire microservice. Such a system would be represented at a very high level schematically by the following diagram: 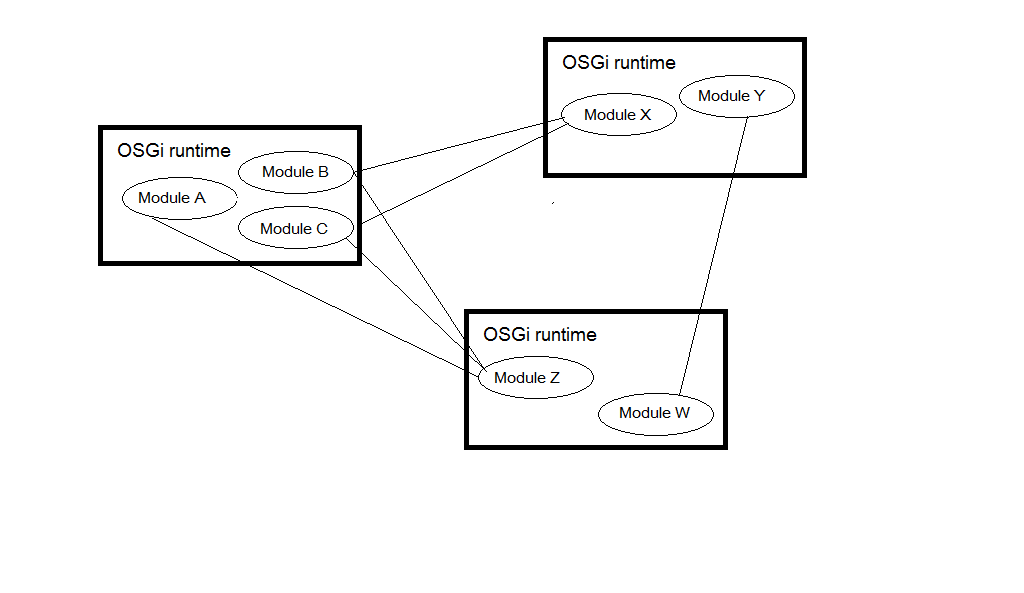 Examples of such complex systems that might be implemented in that manner are:

In this article we will demonstrate how we can get the best of both worlds and build a microservice-based system on top of the Apache Karaf framework (using default Apache Felix OSGi runtime through Karaf) that addresses this latter scenario.

OSGi (Open Services Gateway initiative) provides a set of specifications for building module systems in Java. There are several notorious frameworks implementing the OSGi framework such as Eclipse Equinox and Apache Felix. It is introduced as JSR 8 and JSR 291 to the Java platform.

An OSGi framework/runtime makes use of the Java class loading mechanism in order to implement a container for modular units (bundles). Many application servers are implemented using OSGi as a basis.

An OSGi bundle is a just a JAR file that contains source code, bundle metadata and resources. A bundle may provide various services and components to the OSGi runtime. An OSGi runtime allows for bundles to be installed, started, stopped, updated and uninstalled without requiring a reboot.

Bundles may publish services to the runtime and use already published services from the runtime. This dependency mechanism is provided by the service layer of OSGi.

Microservices From the OSGi Perspective

One can find different definition of microservices but all of them boil down to the notion of an architectural style for development of loosely-coupled, independently deployable units of work that are centred around a business capability (or a tightly-knit group thereof). They should be able to communicate with lightweight protocols and can be developed, tested and scaled independently.

This implies that microservices relate directly to modularization of the system. In that sense we can think of OSGi as microservice-oriented framework running in a JVM environment. To be more precise lets reveal how do the different microservice concepts map to the OSGi world:

However, if we span outside the premises of the OSGi environment, we get into additional challenges related to all of the above and including additional considerations such as load balancing, auto-scaling, self-healing, distributed tracing, resilience, fault tolerance and back-pressure to name a few.

To be more precise the Remote Service Admin spec defines a pluggable management agent called Topology Manager that can fulfil the different concepts mentioned that characterize the interaction between remote OSGi services (effectively the communication channel between the different OSGi runtimes that form the set of microservices).

Let’s demonstrate how the discussed architecture applies to a simple system for car manufacturing.

For the purpose of simplicity we will limit the system to the production of the main parts. The system consists of three microservices which are distinct OSGi runtimes with different modules related to the particular microservice:

The system works in a supply-chain manner, whereby we first build the body of the car, then the doors and finally the windows, before they are finally assembled.

Moreover, since each particular phase of the supply chain is modular, we can upgrade or replace entire modules that build certain parts (such as the hood) without really interacting with the full supply-chain and bringing the system out of operations. 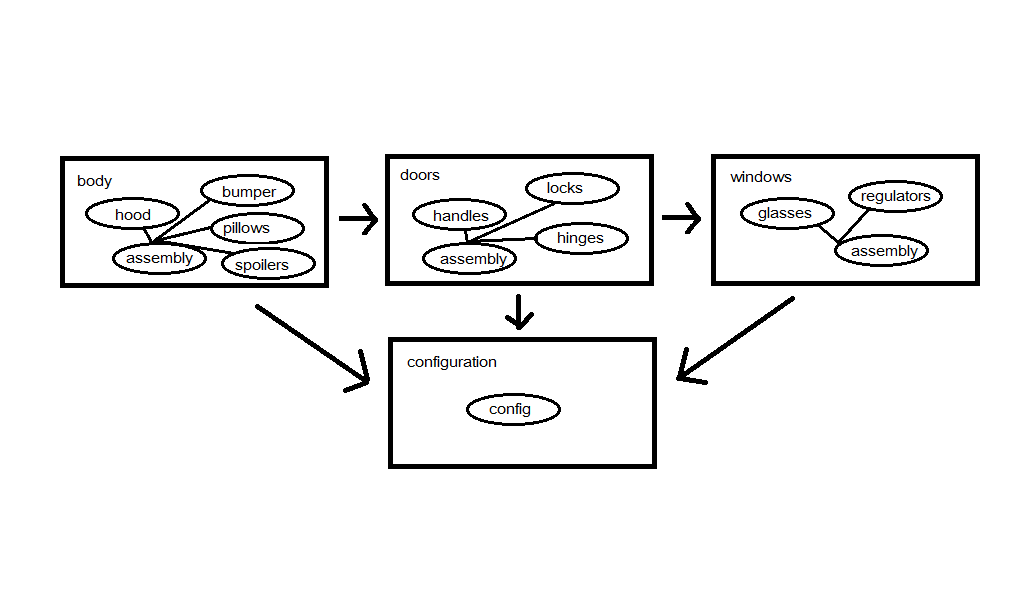 Each distinct microservice has an assembly module that is responsible to assemble the parts for the component represented by the microservice.

Two of the most notorious frameworks that provide implementation of the remote service and remote service admin specifications are Apache CXF and the one provided by ECF (Eclipse Communication Framework).

We will be using the Apache CXF distributed OSGi subproject that implements a REST provider for the Aries Remote Service Admin. We will be deploying our application in a Karaf environment using Felix OSGi runtime (Karaf also provides support for running an Equinox OSGi runtime).

Note that Karaf provides an alternative mechanism for creating a distributed OSGi runtime by means of the Karaf Cellar runtime.

Instead of downloading the CXF DOSGi distribution Karaf comes with a feature that installs it directly in Karaf.

We will demonstrate the sample implementation of the presented system by creating the car body assembly service that communicates with the config services by retrieving configuration data, and writes back completion status after a successful assembly completion.

Since we will need to two separate Karaf runtimes for the deployment of the services we will simulate the scenario by running the runtimes locally on different HTTP ports (9991 and 9992).

Unzip the Karaf distribution at two different locations, create an etc/org.ops4j.pax.web.cfg file in the two installations. In the first distribution specify the following in the created configuration file:

And for the second specify port 9992:

Start the two Karaf runtime with an interactive console as follows:

After the runtimes are started install the CXF DOSGi feature (with the CXF JAX-RS provider) and Jackson JSON provider on both of them as follows:

if you want to observe bundle information from the containers in the browser rather than the Karaf console you can install the webconsole feature.

Now let’s implement and deploy the services one by one and run an example scenario that demonstrates that our services interact as expected.

We use the Maven bundle plugin to generate the module metadata (in the MANIFST.MF file of the module). In order to represent a configuration entry we are going to use a simple POJO provided by the com.exoscale.carassembly.config.api.model.Config class:

The configuration service API is provided by the com.exoscale.carassembly.config.api.ConfigService class:

Build the module as follows:

And then install it and start it as follows in the two Karaf runtimes (through the Karaf consoles):

Alternatively Karaf gives you a bundle ID you can use to start the bundle with the start command.

You can verify the bundle is started by investigating runtime modules with the list command.

The configuration service implementation is provided by a config module that is deployed only on the first Karaf instance (running on port 9991).

The com.exoscale.carassembly.config.GeneralConfigService provides the implementation of the configuration service (full implementation available here ):

The significant part of the implementation is the single compile-time @Component declarative service annotation that is used to generate the service descriptor XML file under the OSGI-INF directory of the module.

The annotation is an easier way to define OSGi service metadata than writing service XML file. In fact it generates the files for use. In this particular case that is OSGI-INF/com.exoscale.carassembly.config.GeneralConfigService.xml. It also provides additional attributes used by the OSGi Remote Service feature (in our case CXF DOSGi):

Build and deploy the module on the Karaf instance running on port 9991.

The car body assembly service is provided by the body.assembly module that has the following Maven metadata: The Maven configuration that provides the build information for the module is available [here]https://github.com/exoscale-labs/Apache_Karaf_Microservices_article/tree/master/sources/body.assembly/pom.xml).

The body assembly service is provided by the com.exoscale.carassembly.body.assembly.services.BodyAssemblyEndpoint interface:

Build and deploy the body assembly service on the second Karaf instance running on port 9992.

In order to make sure that the modules are started correctly without any exception you can run the following command on both Karaf instances to display the log entries:

You should see the following result from the car body assembly:

In the demonstrated setup we used a JAR-RS client for interacting with the configuration service.

It will be way better to just inject the configuration service as a regular OSGi service and let Karaf take care of the service discovery out of the box.

This is possible by setting up Zookeeper for service discovery which is quite straight-forward.

We need to download Zookeeper and create a configuration for it (the zoo_sample.cfg file that comes with the Zookeeper installation can just be copied to a zoo.cfg file as a basic test configuration). We can start it by running:

In addition we need to install the following zookeeper CXF features in the Karaf runtimes:

Then simply restart the Karaf instances and you are all set for distributed service discovery through Zookeeper.

We have implemented a complex style of architecture that is suitable for large scale systems using the OSGi framework in conjunction with the microservice paradigm.

While our example is simple, it models an architecture that can span hundreds of microservices with multiple modules on each.

Implementing concepts such as load balancing, fault tolerance and any of the others already mentioned can be done similarly to how we’ve introduced a centralized configuration service in the architecture.

What to Read Next
Microservices Circuit-Breaker Pattern Implementation: Istio vs Hystrix
How to Integrate Spring With Micronaut
Java for Serverless: Ahead-of-Time compilation with Micronaut and GraalVM