This is a guest post by Tomaz Muraus. Tomaz Muraus is a project chair and a PMC member on the Apache Libcloud project. In his free time, he loves writing code, contributing to open-source projects, advocating for software freedom and cycling. Be sure to check out his website at https://www.tomaz.me.

In this blog post we are going to have a look at Apache Libcloud, an open-source Python library for interacting with many of the popular cloud service providers using a unified API.

Apache Libcloud is an open-source Apache 2.0 licensed Python library for interacting with many of the popular cloud service providers using a unified API. It was created to make it easy for developers to build products that work between any of the services that it supports.

This past week, Libcloud 0.14.0 was released. This version represents a big milestone for the project and it includes many new features, changes and improvements. Among other things it also includes a new driver for Exoscale open cloud which is based on the CloudStack one.

Other changes worth a mention:

Getting started with Libcloud and Exoscale driver

As noted above, Libcloud 0.14.0 now includes an official driver for Exoscale open cloud. In this section we are going to have a look at how to get started with Libcloud and Exoscale driver.

To get started you first need to install the library. Libcloud is a Python library which means you can install it using Python package manager called pip:

After you have installed it, you can start using it.

This example shows how to create a new Exoscale instance or in a Libcloud terminology, a so called node.

On line 10 we obtain a reference to the Exoscale driver and on line 11, we instantiate it with our credentials.

On line 19 we then call create_node with our selected size, image and name.

To make the example work, you need to set API_KEY and API_SECRET_KEY variable to your API credentials. Those credentials can be obtained in the Exoscale control panel.

A couple of seconds after you run this example, you should see a new instance pop up in the control panel.

In this example we are going to have a look at how to bootstrap a node. Bootstrapping means creating a node and once the node comes online, executing arbitrary shell commands on it.

First couple of lines in this example are the same as in the previous one - we select and a size and an image.

On line 29 we import and existing public SSH key. This SSH key will be installed on the created server and used to connect to the server during the bootstrap step.

On line 35 we then call deploy_node method with our select node name, image, size and bootstrap script.

Keep in mind that in this example deploy_node method first waits for the node to come online and after it’s online, it executes our bootstrap script on it. This means that running this example could take a couple of minutes.

After the example completes, the node should be online and have our selected ssh key and chef client installed on it. 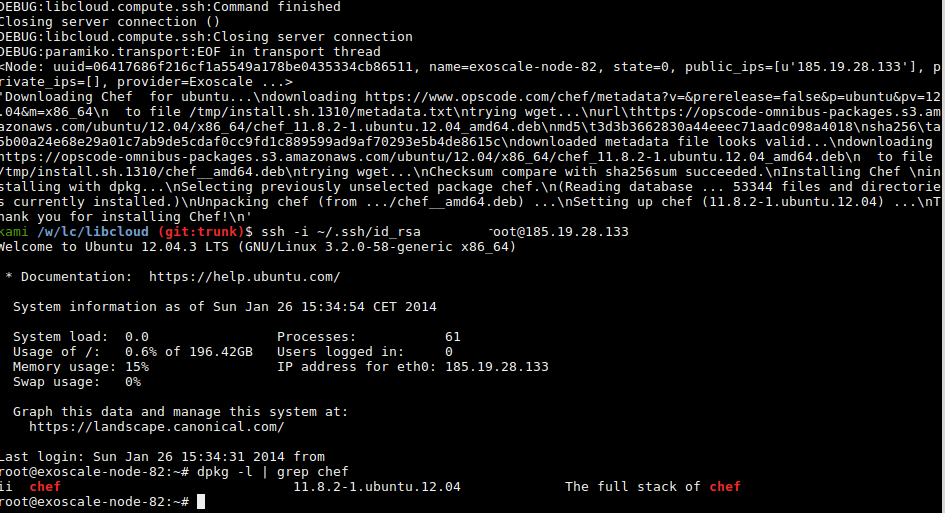 After the script has finished, we can verify that the chef client has been successfully installed on the server.

Where I can find more information / Where to go from here?

As demonstrated in this post, Libcloud is a very powerful library which makes a lot of otherwise boring and complex system administration and automation tasks simple and fun.

In this post we have just barely scratched the surface so we encourage you that for more information and examples, you check the following links bellow: