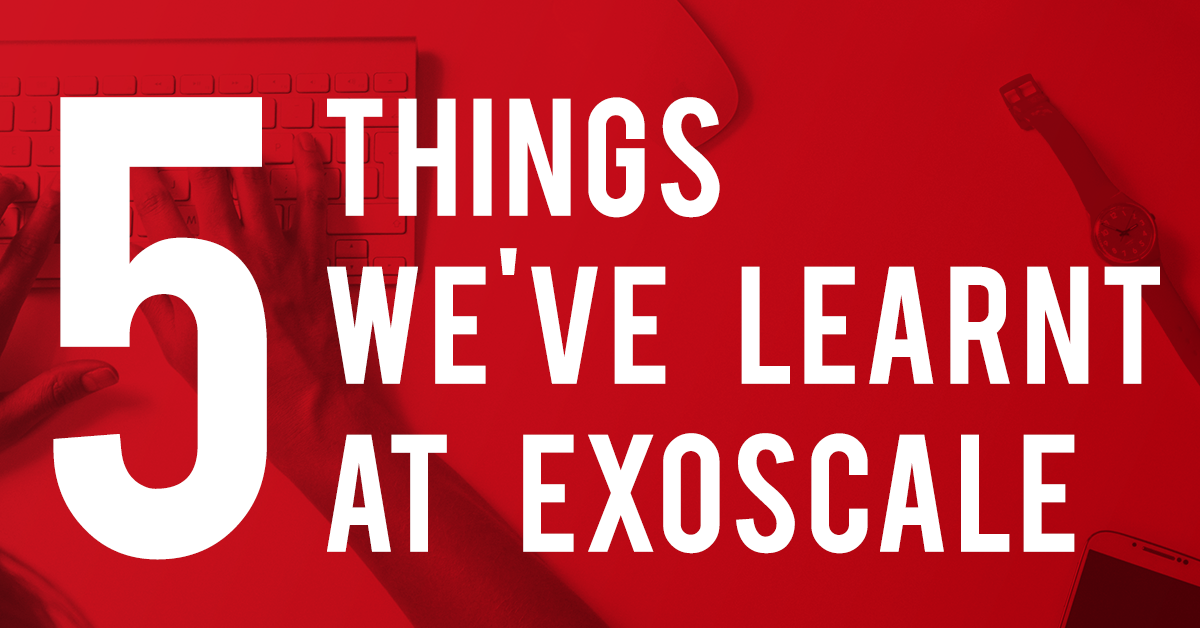 Every start-up has its own story of what has worked and what they’ve learnt.

At Exoscale, our story is shaped by who we are, where we are and what we’re building. Here are five of the things that we’ve learnt along the way.

1. ChatOps isn’t only for Slack

We’ve been doing ChatOps almost from day one. While many ChatOps teams use Slack or HipChat, for us it’s all about IRC.

On our private IRC server we have two main ChatOps channels:

In #dev Hubot monitors our primary GitHub repos. Whenever there’s a commit, a pull request or a merge we get a notification in #dev.

In #ops, the bots notify us of any pager alerts such as a network latency alert from Riemann. This channel is also where we make things happen, as #ops ties into our Jenkins environment. Want to deploy the master branch of the customer management system to production? Send the right message in #ops and wait for the confirmation.

ChatOps means that we can run Exoscale from wherever we have a working IRC client. Whether it’s a smartphone in an airport terminal or a laptop in one of the Exoscale offices, our way of working has location flexibility built right in. It also demystifies the development and ops processes: everyone can see what’s happening at any moment with a quick glance into the appropriate IRC channel.

That’s also helped us with building a distributed company: our tools and methods were already set up ready to welcome team members located outside our HQ.

Exoscale is rooted in open source. Between us we’ve committed code to and been participants in the communities around many projects, including Cloudstack, Cassandra, OpenBSD, Debian, Clojure, Ubuntu, Docker, Python and Django, among others.

So, naturally we’ve built Exoscale using open source infrastructure. Less common is that we use exclusively the open source versions of each project. That means our selection criteria include:

Not only are we lean, but we keep the flexibility to make changes and we’re not dependent on the competing motivations of a group of software vendors.

This has worked in giving us a solid, low-cost, architectural foundation for our business.

So we bring in a lot of open source software and contribute back to those projects. We also build our own software and tooling where that will give us a competitive advantage.

As a public cloud provider, there are many ways we can set Exoscale apart from other providers. Some are business decisions; others depend on the code that’s underlying the service. Early on we decided that, where there was a chance for differentiation, we would build our own systems rather than buying off the shelf. Our customer management system was one of the first things to come out of this decision: rather than buy an off-the-shelf system we built our own and that allows us to be very agile when changing things or introducing new products.

That mixes in cool ways with our use of open source infrastructure, too. For example, we use Cloudstack extensively but we’ve replaced a number of modules where we wanted to do something different.

Self-service is a key part of our offering. You can sign-up for Exoscale, deploy and manage your virtual machines, create and use object storage, spin machines down and so on without ever having to speak to someone from Exoscale.

Too often, cloud services have taken self-service to mean they can ignore or charge customers when they need help.

At Exoscale we’ve made excellent customer support a foundational part of what we do.

We’ve made it easy for people to raise support tickets and our engineering team works on a rotation where they each take a turn answering tickets. That way, we give our customers fast accurate replies and each of us gets an insight into customer pain points and use cases.

The result is that we have remarkably low churn rates: when people choose Exoscale, they stay with us.

5. Being Swiss makes a difference

Start-up culture is often seen as overwhelmingly that of Silicon Valley. For us, our own local culture has been a great influence on the company we’ve built. Mostly, we see the influence of Swiss culture in what we do but we’re an international team and so we have French, German, Italian and British influences too.

Being Swiss means that ours is a privacy-oriented offering, following on from Swiss privacy laws and culture. It also means that the way we make decisions is influenced by Switzerland’s direct democracy; while we have strong leadership, we also give room for everyone to have their say.

Aside from the specifics of how our culture affects Exoscale, the wider lesson we’ve learned is that start-ups should embrace what their own culture brings rather than always trying to recreate Silicon Valley elsewhere.

Of course, every start-up is different. These are some of the things that have worked for us. What’s most exciting is that there’ll always be more lessons to learn as we continue to build our business.